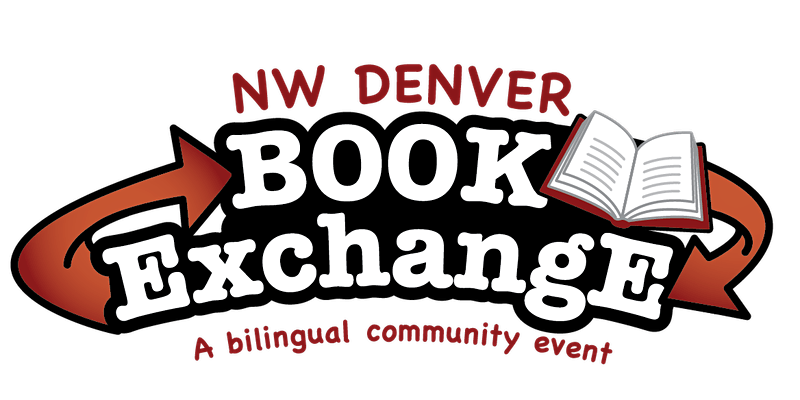 This is kinda where it all began. Ten years ago I was in the midst of a seven year stint as a stay-at-home mother to our two young children. I began craving adult collaboration and missing the satisfaction of working on a larger scale, meaningful project. An informal book exchange among a small group of friends sparked an idea to hold a similar event for my community of Northwest Denver. While this thought was rolling around in my head, a friend reached out to me with the same idea. We reached out to a few other friends who had also been dreaming about such event. Partly, we wanted to get our hands on some new (to us) books but mostly we wanted our community to benefit from this as well.

The first NW Denver Community book exchange was held in Spring 2010 at Academia Ana Marie Sandoval School cafeteria, where our children were attending ECE. Because Sandoval is a bilingual school and many of our neighbors and community members are native Spanish speakers, it was important to us to create an inclusive, bilingual event, which remains our mission today. We want to get books into everyone’s hands easily and very low cost (the only price is your already read books).

The book exchange was a success from that first year. That and each subsequent year brought, on an annual average, 200 people of all ages, resulted in roughly 1,000 books changing hands, and about as many left-over for donations to non-profit organizations in need of books. This event grew, of course, seeing more families turn out with more books until, in later years, we eventually moved to the North High School cafeteria. It was around that time that I opened BookBar, which became a sponsor of the book exchange along with Sour Grapes Design who created our logo, and Web501 who built a beautiful website. This event is low expense but, still, having BookBar cover the expenses allowed the organizers to do the organizing and not split out of pocket expenses among us. And we were able to gift our fabulous volunteers with BookBar gift cards.

This event was also the inspiration behind our purchase of Mavis the Magical BookMobile. Between the three organizers, we used to split up the 1,000ish left-over books in our cars, stashing them in our garages until we could distribute them to organizations. In recent years, however, we’ve been able to just pack up Mavis with the donations and then deliver them as needed. Of course, we found a million other uses for Mavis in the process.

Meanwhile, back at BookBar, we followed the lead of the previous bookstore in our location, The Bookery Nook, and accepted ongoing book donations throughout the year, and donated them to The Colorado Coalition for the Homeless. This program grew as well. We eventually became overwhelmed with book donations, squirreling them away in every dark corner of the store and in every storage space we could find. Our staff was becoming overtaxed, as well, with trying to coordinate donations in and and out of the store. In 2018 it became clear that we either needed to halt our donation program… or expand it. BookGive was born in 2018. I hired Melissa Monforti as our Executive Director in 2019 and together, we formed a board of directors, moved into our headquarters at 4890 Lowell Blvd. (the former Regis 66 building), and became a 501c3 in March 2020.

It may sound insane to forge ahead with launching a new non-profit organization in the throes of a pandemic, however, this work has never been more necessary. Just as libraries, schools, and bookstores were shuttered, we all had more time on our hands than ever. We wanted to help ensure that at least some of that time was being spent reading. We developed Covid-safe donation drop-off, delivery, and pickup protocols and got to work. Just since March we have been able to receive over 22,000 book donations, donate more than 17,000 of those to 70 Denver non-profit organizations and dozens of Little Free Libraries throughout the metro area (thanks to Mavis).

We did all of this but couldn’t see our way to hosting a community book exchange during Covid. But then we met Itay. We received an email one day from a man who wanted to give back; to get books to people so his idea was to simply set up a table at the capitol and hand out books to whoever wants them. He welcomes donations of books but it is not a requirement. Itay reached out to us to see if we could help by donating a few books to his cause. I met him over at the Service Station and loaded him up with books, encouraging him to return every weekend for more books to continue his mission at the Capitol. Itay inspired me. His drive and passion for giving books away reminded me of how this all started in the first place. Not only did we hire him at BookBar (come by and say ‘hi’ to him!), but we are now helping fuel his passion and, like most good ideas, led us to ask ourselves “why not?” Why not host our tenth book exchange at our very own headquarters where we wouldn’t even need to haul books anywhere post-event?

We started planning how to pull of an event such as this in a safe and effective way. This year will look and feel a little different of course. The location is new for any past attendees, we will all be masked and gloved up, the incoming donations will be set aside for quarantine and our existing stock will be available for perusing. We will have reservation only timed entry in order to adhere to social distancing requirements. Oh and it will be outdoors on a gorgeous Fall day. But the idea is the same. Bring a book. Take a book. If you like what we do, we will certainly be accepting monetary donations. But mostly – take a book. It’s looking like we’ll all have a long Fall and Winter in store for us so we have plenty of Fiction and Fantasy. We’ll all need to probably get a little lost in other lands these next few months.

We hope to see you on Monday. We only have a few slots left so be sure and reserve your space early HERE– or go see Itay at the Capitol Building on Saturdays from 10 am-2 pm at his Solidarity Book Exchange.