Gillian Philip is one of the authors under the pen name, Erin Hunter. She has written for the Survivors series, along with Inbali Iserles. She lives in the northeast Scottish Highlands with her husband, three dogs, two cats, and hamster. She is also the author to the Rebel Angels series, the Darke Academy series, and young adult novels including Bad Faith, Crossing The Line, and The Opposite of Amber.

Q: You work with a team of women to publish your work. Can you tell me about that process of teamwork and the relationship you all share together?

A: It’s a really different way of writing than I did before just on my own, but it was really easy to adapt to, and so much fun. There’s about six writers as well as an editorial team. It’s kind of centered in London, but we’re all over the place, so we tend to communicate by email or phone. We plan storylines really carefully, which doesn’t mean it always goes to plan, we still come across stumbling points. So the story line is planned, and then just one writer takes and writes the story, since it’s easier to do it smoothly that way. It’s all checked by the team to make sure the voice is right, because Erin’s voice has to be consistent. We try to make it like Erin’s a real personality and she has her own style. I always think it’s like Dr Who, and Erin just regenerates. It’s a great way of working, I really like it.

Q: You’ve written series about cats, dogs, and bears. What drew you to the animals in The Bravelands (a lion, elephant, and baboon)?

A: We wanted to do something a bit different. We always focused on one species. Now we focused on three different species, and found out how they interact and relate to each other, and how they come into conflict together. Also, we wanted a setting with an epic sweep. Something really big so that the setting and environment was going to be as big of a character as the animals. The ideal one to choose seemed to be the African Savanna because it’s so huge and sweeping. There’s so many different ecosystems, you get forests and rivers, mountains and planes. There’s so many exciting opportunities for really different settings,  and of course because the animals who live there are such big animals with big personalities. We knew we could choose three fantastic species. 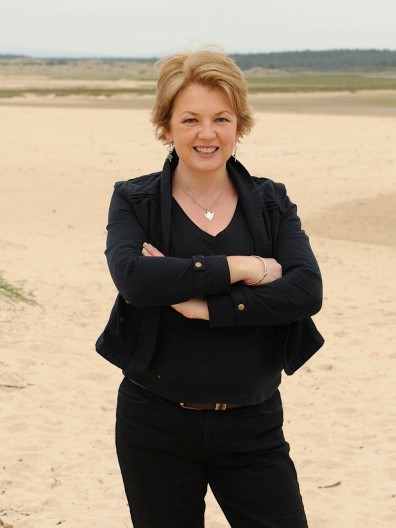 Q: Do animals play a large role in your life outside of writing?

A: Mhmm! They do, they certainly do, I love animals. I’ve got three dogs. They’re like a little pack. They were really helpful when I was working on Survivors, to see their interactions. Clooney’s the big guy, he’s a labrador. Milo’s a little fluffy lap dog, and Otto’s kind of a little mongrel, half lap dog half jack russell. He’s Milo’s son. Otto is the littlest, but he’s the smartest and most ruthless. He’s totally the top dog, he’s got a collar that says top dog. It’s funny to see the big dog isn’t always the one that wins, Otto totally bosses the other two around. I have them and I have two cats who are very sweet. And I also have a lot of chickens, all named after country singers. I love them. They’re so great, get chickens.

Q:You bust out so many books one after the other. Where do you draw inspiration from to fuel all that writing?

A: Basically from loving what we’re writing about. And having a team means we get to produce books faster. All the Erin’s love animals, we know animals. Especially with going into all these different species, trying to get inside their heads never gets boring. It’s a real challenge to get inside an animal’s head, and figure how they think and sense things. It’s just fun. One of the kids at the school was asking me today how much research I had to do, and It’s not just one big block of research. I’ll just be writing and have to check ‘Oh what would a cheetah do in this situation?’ I’ll look up Wikipedia and I’ll go on some rabbit hole wildlife sites. It’s really fun and fascinating, it makes it go faster because it’s so interesting. I thought I knew quite a few things, but I’ve learned things writing Bravelands, it’s just so cool. It’s hard to get myself out of it.

Q:Writing about these animals, do you find yourself wanting to visit a Savanna?

A: Oh yeah. I have been, I went in the 90’s on quite a long trip to Kenya and Malawi. I love it. There’s so much to see and experience, and I’ve done stupid things like swimming in Lake Malawi while there’s Hippos there in the bay. My husband and I were in the sunset thinking, oh this is so romantic swimming in the sunset! But turns out hippos kill more people than anything. But yeah, I would love to go back. Actually, my daughter went to do some work in Kenya this summer, she got to go on safaris and I was so jealous!

Q: Your work provides this fun outlet for young teens and kids to begin reading. Can you speak to anything about that?

A: I’m really delighted if that is what happens. I do hear from a lot of kids and parents who say it’s Warriors that got them into reading. The parents will say their kid wasn’t interested in reading until she discovered whichever series, and it’s really, really rewarding. I love to hear that. What’s great is how involved the readers seem to get in the characters. Kids come to events bringing pictures and family trees they’ve drawn, or stories they’ve written about the characters. That’s what you love about being a writer, because you love your characters, and you really want other people to love them. To hear kids getting so investing in characters is lovely.

Q: The first book of the Warriors series, Into the Wild, was published in 2003. How has your audience changed and grown? Did you expect to be continuing this journey this long?

A: I came on board the Erin Hunter team for Survivors, so the Warriors and Seekers books were already established. So, I hear a lot of people say they started Warriors when they were 7 or 8, and so many people say they’ve grown up with them, and they’ve introduced their young brothers, sisters, and cousins to them.  People become teenagers and adults and they’re still reading them. I heard someone today who’s 23 and he’s just starting to reread them. That’s really nice. We have a really loyal fanbase. And oh, how much do they know, it’s amazing. They know the cats, the relationships, families, and the dogs and the bears. Sometimes someone will ask me a question I cannot answer, and all I have to do is turn to the rest of the audience, and there’s always someone who can answer.

Q: You are extremely successful. What difficulties have you overcome to get to where you are now?

A: Well, I was a slow starter. I always wanted to be a writer. When I was little, I wrote stories, that’s what I did it was my favorite thing. And I kind of gave up. I got to be a teenager, I was getting older, and I thought I wasn’t doing it right. I thought everything had to be plotted beautifully and that I had to know what was going to happen. It was only when I was older and I thought, I gotta try this. If I don’t try, I’ll regret it. Even if I fail, at least I’ll have tried. It was just after my kids had been born and then I went back to it. I started to write a story, and I wrote and went on an adventure with the characters and didn’t know what was going to happen, and it worked. I did that several times. I wrote about four books, before I wrote one that was actually good enough to get published, because the first one was rubbish. But once I decided to percephere, I did it. The fourth one was published. I was a slow starter, and I wish I had started earlier, and realized there were other ways of writing, and that there wasn’t actually a wrong way of writing. As long as you keep persevering, and keep writing the next book, and when that’s done, write the next book. I think that is the secret. You can’t get discouraged by rejection, because everyone gets rejected. Even previously published authors.

Q: If you could be any animal, what would you be?

A: Oh my gosh. There are so many to choose from. You know, running has never been my thing. I would like to be able to run really really fast, so I’m gonna say a Cheetah.