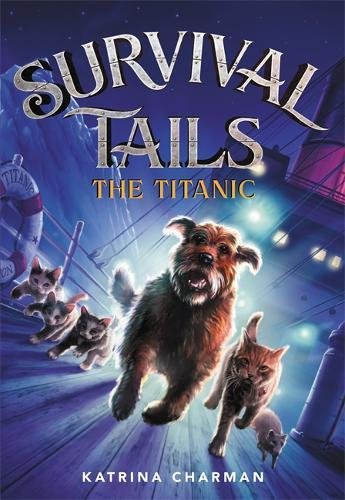 This book is about animals on the Titanic.  Alice and her dad are very, very poor, so their dog Mutt is dirty, but he’s not small; he’s a big dog. Mutt isn’t a well cared for, fluffy, tiny, first-class dog. He met King Leon on the Titanic who gave him good advice of how to survive on the sinking ship. “ Follow the rats” he had said. Later, when the ship was sinking rapidly, this advice came in handy and Mutt found Alice, his girl.

King Leon is my favorite character, and he is a rat. He does not have a tail, but a little stump where it used to be. King Leon saved animals on the sinking Titanic. He came onto the ship when it was built in Belfast, because he is a ship rat.

Clara is the captain’s cat and also found three kittens in a lifeboat when the story was starting. Their names where Violet, Jack, and Cosmo.

Who will survive and who will perish?

The different chapters switch between the perspectives of Mutt and Clara. So something exciting will happen with Mutt then Clara, Mutt then Clara. At the very back, (I LOVE this part), there are cool facts about the Titanic, like the timeline, the different levels of the ship, and the animals that were on board. Pick up this twist on a historical event today!