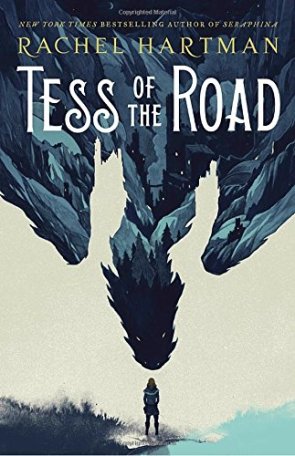 Title: Tess of the Road

Set in the world of Seraphina, in the medieval kingdom of Goredd, women are supposed to be ladies, relying on men as their protectors, allowing dragons to be whoever they want. Tess Dombegh, a stubborn troublemaker since childhood refuses to go along with her family’s plans to send her to a nunnery to ‘purge’ her of all the troublesome wickedness that she is believed to harbor. Unwilling to go through with this, Tess sets out on a journey across the Southlands, by herself, pretending to be a boy. Where Tess is headed is a mystery, even to her and it is a stroke of luck when she runs into an old friend, Pathka, a quigutl (subspecies of dragon) who gives her protection and ignites in Tess, a purpose while they journey together on the Road. However, Tess guards a secret. Despite the efforts she has taken over the years, her burdensome past and the painful memories that she has tried to forget, threaten to expose her in more ways than one.

What I absolutely loved was the author, Rachel Hartman’s ability to broach the topic of women’s rights, women’s roles in society, and women empowerment all in one young adult novel. Even though Tess struck me as an odd character at first, the more I got to learn about her pregnancy, her situation, and how that shaped who she was, I got to learn more about how society views women and often hinders their ability to achieve independence and the freedom to choose how they live. What I especially liked in accordance to this topic, was Tess’ time spent with the road workers. Even while disguised as a man, it was obvious to see just how much power and leeway men are given in today’s culture. I also loved being able to learn about Tess in little pieces of information–her story was never given all at once. What I also ADORED, was the writing in this novel. Each of Rachel Hartman’s words were beautifully crafted, metaphorically rich, and wonderfully detailed. The writing in this book felt so lovely and fresh, which added to the overall plot.

However, I did feel that this book had a very slow beginning. The book actually began to pick up more in the middle, and I felt that I started enjoying the story more around when Tess sought work with the road working men. Near the beginning, I felt that the focus was more on Pathka’s quest for Anathuthia rather than the reader seeing the development of Tess as a character. Since I haven’t read any of Rachel Hartman’s other books, such as the Seraphina Duology from which Tess’ world is based on, I began the book quite confused, so it is really helpful if the reader has read Seraphina and Shadow Scale.

Tess of the Road is definitely a rich fantasy, young adult novel, which addressed the topic of women and their identity in society, which I certainly did not expect when diving into the novel. I would recommend it to those who have read and liked Seraphina and Shadow Scale, those who are fans of Rachel Hartmann’s other books, and Kristin Cashore’s Graceling Trilogy. I give this book a 6 out of 10 stars.