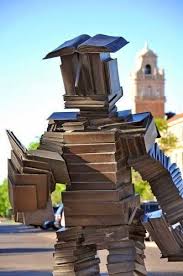 A city in the far-flung suburbs. A culture of literacy. A network of readers and introverts

Festivals are all the rage today and literary festivals are certainly no exception. BookBar is excited to announce the first annual Burning Book festival kicking off in Spring 2019. Think Burning Man where we will most decidedly NOT be burning books but, rather, celebrating books that have been burned, banned, challenged and shunned. We will be leasing a large parcel of land off of a service road near Denver International Airport to erect a temporary book city where literary pilgrims from across the world will converge to pay homage to the book. Nearly anything goes at Burning Book (except for book burning). In the spirit of Burning Man, a multi-day cultural experience will bring literature to life. Bring your literary art, costumes, re-enact scenes from banned and/or challenged books in order to keep the authors’ visions alive. Like its namesake, Burning Man, this event will be guided by The 10 Principles:

This multi-day event will conclude with a thorough water drenching of a giant book man so that it may never burn. Join us. Be a non-burner!