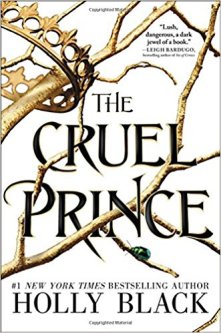 Jude was merely a seven year old, upon witnessing the murder of her parents, and when she and her two sisters were stolen away and forced to grow up in the treacherous High Court of Faerie. Ten years later, Jude, desperate to belong in the world of the Faerie despite her mortality, seeks to win a place at Court. However, many of the fey despise humans, especially Prince Cardan, the most nefarious son of the High King. In order to win her rightful place at the Court, Jude must defy him, and in doing so, she becomes ensnared in place intrigues, mysteries, and deceptions, soon discovering her own capacity for destruction and bloodshed. As civil war stirs, threatening the stability of the Courts of Faerie, Jude will need to risk her life in a dangerous alliance to save her sisters and all of Faerie itself.

The darkness and intrigue in this book were excellently and vividly written. This novel was fantastic in a dark, unsettling, and wholly true way. What I really enjoyed the most, was seeing the development of Jude as the main protagonist. At the beginning of the novel, she is presented as more introverted, desiring to be a faerie, but by the end of the book, the reader discovers her ability to destroy, scheme, and rise above the negativity, and often violence that is directed toward her due to her mortality. Definitely, she is a strong, determined, cunning, and absolutely ruthless character. The mysteries and secrets in this novel were entangled in ways that I could not have possibly foreseen, making this an exciting read. Holly Black’s writing style is refreshingly lush, highly visual, and descriptive, weaving together a dangerous tale. The way the novel was concocted exerted a sense of peril and tension no matter what was happening.

While this book was wonderfully dark and dangerous, what I didn’t like was that overall, there wasn’t a lot of action in this novel. While the secrets and mysteries, and following Jude and her journey to find herself as well as save the High Court of Faerie, was indeed riveting and exciting, this book felt like more of an intellectual read to me. It was thrilling in a way that one might get when waiting for the pieces of an obscure puzzle to come together, and while I loved the novel, I felt that I was missing a lot of action.

The Cruel Prince by Holly Black is a fascinating, dangerous, wildly compelling novel that would appeal to anyone who loves faeries, fantasy, secrets, and strong female protagonists. I would recommend this novel to older Young Adult readers and to those who are fans of any of Holly Black’s other faerie works, as well as Sarah J. Maas’ A Court of Thorns and Roses series and Kiersten White’s books. I give this book an 8 out of 10 stars.