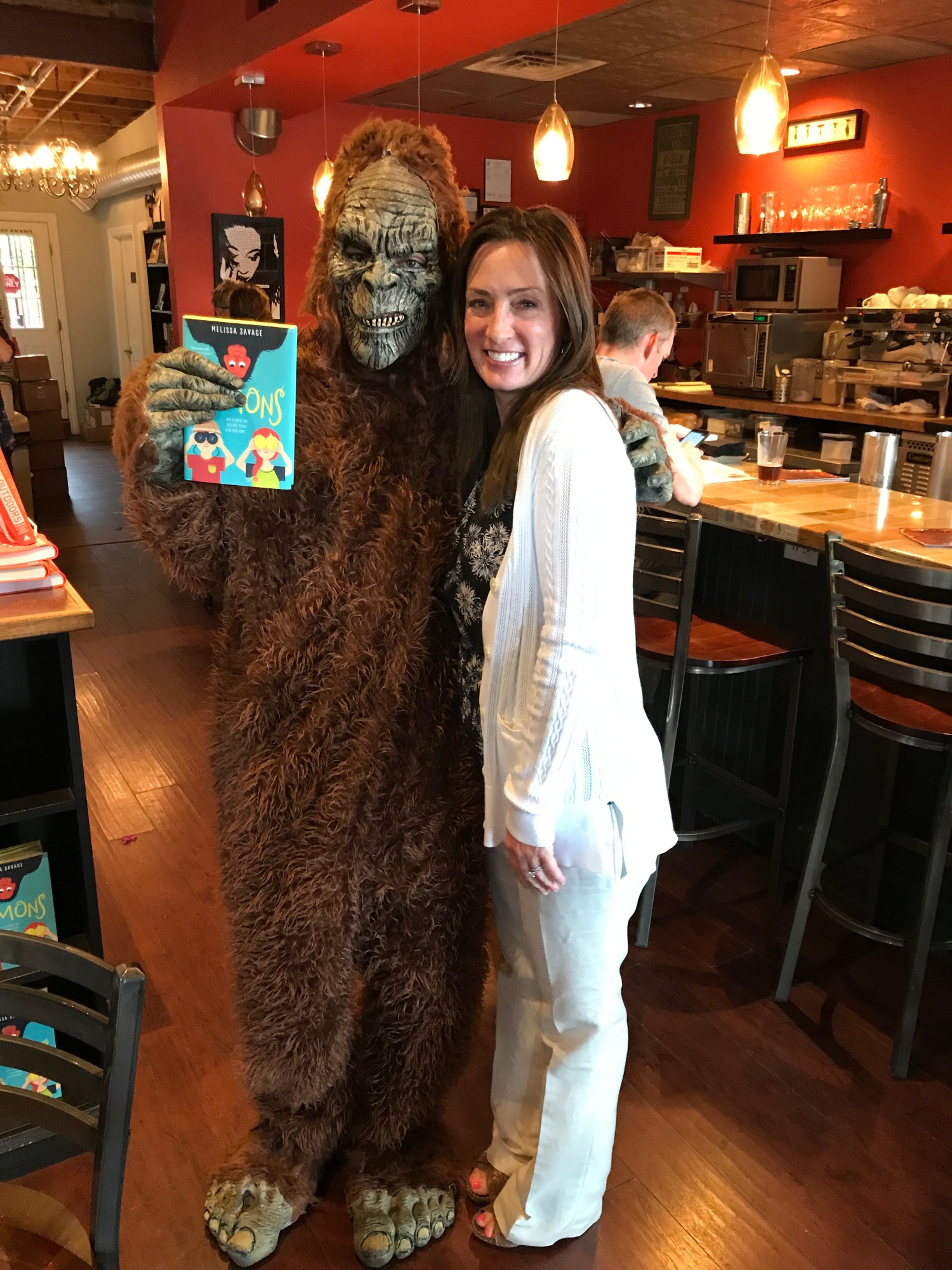 A sign in Charlie’s Bigfoot store in Willow Creek, California reads, “Take a Story.
Leave a Story.” Ten year old Lemonade Liberty Witt has just lost her mother and is on
her way to live with her grandfather, a man she has never met, in the Bigfoot Capital of
the world. Lemons is a heartwarming story filled with love, sorrow, adventure, and life.
It is a story you must definitely take home with you. But this is my chance to leave a
story. And my story is about my day with Melissa Savage.
I met Melissa and her husband, Jeff, early Friday morning outside BookBar in
Denver, Colorado. I had arranged an author visit for Melissa and was escorting her to
a neighborhood school, Centennial Elementary, where she was prepared to present her
book to 200 third, fourth, and fifth graders. Melissa’s debut novel had just been
released in May, and I knew the students would be unfamiliar with her book. Plus, it
was the last week of school with field days happening that very afternoon. I was
nervous for Melissa. This could be the perfect storm of kids gone wild!
But, instead, it was a joyful celebration of reading, writing, and Bigfoot. Melissa
immediately captured the students’ imagination and their enthusiam for her book
immediately became apparent as they learned Bigfoot facts, acted out a chapter in the
book, and watched the famous Patterson and Gimlin’s film documenting Bigfoot.
Following her presentation, order forms for her book flew out of my hands, the only
disappointment being that the students couldn’t start reading immediately. I have not
seen this kind of joy in children’s faces since taking my own children to midnight
releases of Harry Potter books, when I insisted they sleep first. I can now hardly wait to
deliver their books on Monday! There is nothing that will make you smile more than a
group of children ready to be engrossed in a great book.

After returning to BookBar, and Melissa accompanying me to storytime at the
Denver Cat Cafe (because who knew Tennyson Street also had a cat cafe), we went to
lunch at El Chingon, a delicious Mexican restaurant, also on Tennyson. It was here
where I fell in love with Melissa and Jeff. I learned their love story, which began at their
20 year high school reunion. They went all through school together beginning in
kindergarten, and went their separate ways after graduation, reconnecting 20 years
later. And I learned their heartache, when they shared the death of their son, Tobin. I
saw their excitement in sharing the story of Melissa’s book journey with Lemons, which
began with a 15 page short story and ended with Penguin Random House winning an
auction between two other publishing houses. Additionally she secured an international
publisher, Chicken House (who began their business with J.K. Rowling). I saw the
love and admiration in Jeff’s eyes as he beamed with pride at Melissa’s budding
success. In fact, it was hard to tell who was more tickled, Melissa or Jeff.
But it wasn’t until the evening event at BookBar when I realized what actually
was happening before my eyes. I was being given the unigue opportunity of witnessing
someone on the brink of greatness, when a life is suddenly going to take on a whole
different direction.

We all ate BookBar’s lemon cookies and lemon tarts as I watched
Melissa signing books, talking with the customers. A man in a Bigfoot costume ran
around the store creating hype and a fun atmosphere. Yet, it was Melissa who was
creating the magic. Her kind and gentle spirit made my heart soar, and, after talking
with my librarian friend, confirmed what I already suspected.

“Life is the definition of loss. But it makes us grow, and it makes us stronger. The most
important thing to remember is to have gratitude for those we love and those who love
us. Even if it’s not for the amount of time we expected or wished for. If you don’t, you
can be washed away by the sadness.” “Your loss will always be a part of you, making
you stronger, braver, and more loving because of what you carried. Your task now is to
learn to accept your new life without forgetting the gifts of your past. These are the gifts
of your new life.”

Melissa touched my heart, both in her book and in meeting her. Spending Friday
with her actually was a day that could have been just ordinary, but quickly became
extraordinary. A day that started with a simple greeting and ended with tears of joy as I
watched what was happening around me. A star was being born!
As I leave my story, I have to say that my life received a special gift from Melissa
and Jeff. And Tobin. Tobin will now live forever in all of us. And for that, I am extremely
grateful. Lemons is truly a masterpiece. To share the words with Lemonade Liberty
Witt, “It makes me feel important and part of something big!”